Gut Health / The Gluten-Thyroid Connection – Everything You Need to Know

Should I avoid gluten if I have thyroid issues?

What if it doesn’t bother my stomach?

Are small amounts of gluten ok?

Do you have questions like these? If so, you’ve come to the right place!

I’m going to walk you through everything you need to know about the connection between Hashimoto’s and gluten, and what to do about it.

Hashimoto’s is the number one cause of low thyroid function, responsible for about 90% of cases.  It is relatively common, affecting about 5 out of 100 people in the United States 1.

Hashimoto’s is an autoimmune disorder in which your immune system attacks your own tissue, specifically your thyroid.  Your thyroid is a small, butterfly-shaped gland in the front of your neck.  It produces thyroid hormones T4 and T3, which control how your body uses energy.  Every organ in your body is controlled by this energy, so the thyroid can affect everything from your weight to your heartbeat to your body temperature. If you develop Hashimoto’s your thyroid becomes damaged leading to low thyroid hormone production aka “hypothyroidism”.

This results in a wide variety of symptoms including:

Think you may have Hashimoto’s and/or low thyroid function?  Click here to learn which labs you need to run!

Next, Let’s Talk about Gluten

Gluten is not a food.  Gluten is a specific collection of proteins found in certain foods like wheat, barley, rye and spelt.

Foods that often contain gluten include: Fifty years ago no one talked about gluten.

Now more and more people are going gluten-free.  Celiac and non-Celiac gluten sensitivity rates have skyrocketed.  Gluten-free products are available at grocery stores and many restaurants. Now we understand gluten has changed a lot, in a negative way.  But why is there such a strong connection between Hashimoto’s and gluten sensitivity?

It just so happens that the thyroid tissue contains proteins that looks very similar to gliadin, the protein portion found in gluten.

When you consume gluten-containing foods and your immune system attacks the gliadin protein, it can get confused and attack the thyroid as well 6.

For this reason it is critical to remove all gluten from the diet if you are experiencing thyroid issues, even if you don’t notice digestive issues or other symptoms after consuming it. Is a Little Bit of Gluten ok?

Autoimmune responses to gluten ingestion can last up to six months7  so it is best to avoid gluten 100% of the time.  Every time your immune system sees gluten, even in small amounts, it launches an attack against the gluten and then attacks the thyroid.  To achieve Hashimoto’s remission, the attack has to be stopped completely!

Sometimes a gluten-free diet is enough to stop the autoimmune attack, and sometimes it is just one piece of the puzzle.  Autoimmune diseases are often multifactorial in nature – it’s not just a gluten sensitivity, or just gut health, or just an underlying viral infection, etc.  Although a gluten-free diet isn’t always the magic bullet, it is a critical piece of the autoimmune puzzle.

Going gluten-free is very doable thanks to many gluten-free products and recipes.  Just make sure to look for a gluten-free label on food products and never make assumptions.  Sometimes gluten can be hidden in surprising places like soups, veggie burgers, and soy sauce.  It may feel daunting at first, but my clients are often shocked at how easy a gluten-free diet becomes with time. Thankfully many restaurants offer gluten-free options, but sometimes cross-contamination can be an issue.  I recommend a specific digestive enzyme called GlutenFlam for my clients when eating out.  They can take these enzymes when they are in any eating situation where small amounts of gluten could sneak in.  These enzymes contain DPP IV which is capable of breaking down small amounts of the gluten protein (unfortunately it won’t work for large amounts but research is still in the works!).  This enzyme is only available through a healthcare professional, so talk with your Functional Medicine practitioner to see if they would be willing to prescribe it. 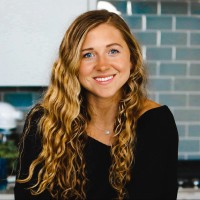 Taylor Stolt is a Functional Medicine Dietitian who specializes in gut health, autoimmune disease, hormone imbalance, and inflammatory conditions. She is a practitioner at Carpathia Collaborative, a cutting-edge functional medicine clinic in Dallas, TX. Taylor uses a functional, whole-body approach by combining laboratory analysis, nutrition, lifestyle changes and supplements to determine and treat root causes of her clients' issues and lead them towards a vibrant life. [READ ALL ARTICLES] Simplify Your Approach To Cooking A Healing Diet 3 Steps to Support and Heal Your Thyroid